Showing posts from March, 2011
Show all

March 30, 2011
I have had many request from the Usual Suspects to do a video series on making cocktails and here is my first attempt.

Here is the Reciepe

March 21, 2011
It is a well known fact among the Usual Suspects that I do not get hangovers. Well the fact is that is not entirely true. However, another fact to live by is “What is good for me is not necessarily good for the weak hearted.” Why you ask? Fact three, I am a professional drinker and while not in the same class as my new idol/mentor, Dan Dunn, and to quote James T. Kirk when it comes to drinking I often go “Where no man has gone before.”

According to Wikipedia a hangover describes the sum of unpleasant physiological effects following heavy consumption of alcoholic beverages. The most commonly reported characteristics of a hangover include headache, nausea, sensitivity to light and noise, lethargy, dysphoria, diarrhea and thirst, typically after the intoxicating effect of the alcohol begin to wear off.

On this day in 461 A.D., Saint Patrick, Christian missionary, bishop and apostle of Ireland, dies at Saul, Downpatrick, Ireland.

Much of what is known about Patrick's legendary life comes from the Confessio, a book he wrote during his last years. Born in Great Britain, probably in Scotland, to a well-to-do Christian family of Roman citizenship, Patrick was captured and enslaved at age 16 by Irish marauders. For the next six years, he worked as a herder in Ireland, turning to a deepening religious faith for comfort. Following the counsel of a voice he heard in a dream one night, he escaped and found passage on a ship to Britain, where he was eventually reunited with his family.

According to the Confessio, in Britain Patrick had another dream, in which an individual named Victoricus gave him a letter, entitled "The Voice of the Irish." As he read it, Patrick seemed to hear the voices of Irishmen pleading him …
Post a Comment
Read more 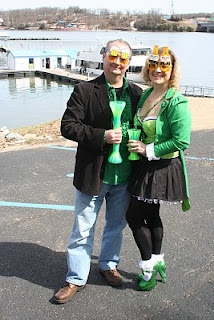 Last year I posted a history or the history such as we know it on St. Patrick’s Day and I may indeed rerun this post later in the week. However, this week I believe I will post a little on a St. Pat’s Party I was fortunate to attend.

We left K.C. late last week and headed for the Lake of the Ozarks and our condo for the annual St. Patty’s Day Cruise on the Celebration. Most of you undoubtedly have noticed the high gas prices lately and indeed a trip of this length is not cheap, but for MySideOfTheBar I am not going to worry about gas prices (well not yet anyway)

Friday night we hit it a little hard with the Usual Suspects at Baypoint and finally shut it down about 3:00 in the A.M. Actually I had a night cap of scotch so it was closer to four in the morning for me.

We were back up and at it around nine and while I do not get hang-over’s I could not help but think what a good hang-over food would be. In the old days Central Patti and I had the nicknames of Mashed Tater and Cream Horn. …
Post a Comment
Read more

This and That; Ramblings of a drinker.

March 05, 2011
Looking at the title of this post and thinking that would make a great title for a Blog or even a book. Hum? In any event I am posting early this week as I had a nice evening last Friday sans Central Patti whose attendance would have made it a great night.

If I did not know better I would think I had a hangover, but as I do not get hangovers I must have slept wrong. Could it be the 10 shots of Bourbon I had? No I think not, but I digress. Fortunately I stated to take the advice of my second favorite author Dan Dunn and started to carry a note pad and my smart phone so I can remember where I have been, who I talked to and other important events from the previous night. Why you ask? So I can post them here and you can enjoy.

Started the evening with Happy Hour here at MySideOfTheBar with 4 Hemingway Highballs then walked up to Californo’s in Westport. I had not seen Joel in awhile and as previously posted he makes the best Manhattan in KC. I was kicked out after one drink! No not for…
Post a Comment
Read more 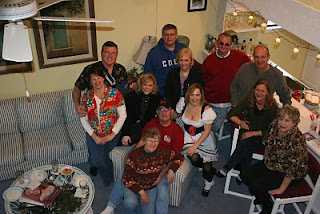 Believe it or not it was that time of year again. Time for the fourth annual Condo Crawl here at Baypoint. The weekend started a little rough with Central Patti and I having to leave K.C. a little early just to stay one step and two degrees above the freezing rain and snow. However, we were very luck compared to S. and C. O. who had to spend the night in the Roach Motel in Palmyra MO. And to make matters worse the seasoned pair from the great state of Iowa did not even pack a proper winter travel kit. You know extra clothes, snow shovel and lots of BOOZE!

In any event we all did make it and this year we had six condos represented. We started Friday night in tradition with the planning party at S. and S. M’s condo and I drank my traditional bottle of Grants while the gals plotted the order of the crawl.


Saturday as with many other days at the condo start with tradition and this year was no different as S.O. and I began the morning with the traditional walking of the docks to see if, we…
Post a Comment
Read more
More posts