Showing posts from May, 2015
Show all

Recently I was given a bottle of Bulleit Bourbon Frontier Whiskey 10 Year Limited Release by one of the new "Usual Suspects" J.E.

The taste is interesting to say the least (more on that at a latter date), however the story behind it is more that a little interesting so I thought I would relay it here in a multi-part post.

The Tough Old Days
The American frontier was a time as well as a place. It was an era rich with opportunity but not short on hardship and strife. Dreaming big and taking risks was just a way of life. Many headed west with little more than a horse, an axe, a bag of salt, a barrel of Bourbon and a dream.


When Whiskey Meant Bourbon
They crossed the Red River, The Badlands, The High Sierras, Death Valley. They were mountain men and cowboys. Wives and dance hall girls. Men of few words and women of substance who when they asked for Whiskey, expected Bourbon.

Bulleit Bourbon
Augustus Bulleit knew a good thing when he tasted it. (as you probably do as well as  you ar…
1 comment
Read more 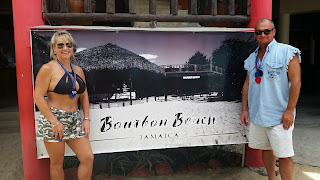 Recently we took MySideOfTheBar on the road to the beautiful island country of Jamaica. Central Patti and I set aside one day to do a Jamaican Pub Crawl to some of the local (and semi-local) pubs. I thought you may enjoy a recap of the day.

The first stop on the crawl was a beach bar that was semi-local. What I mean by that is that it was on the beach and kind of in a tourist area, however outside of our small group, it looked to be only locals in attendance.


I made two observances here at Bourbon Beach; 1 was they did not have bourbon ;) and the other was while you immediately smelled marijuana when entering you saw this sign at the beach bar.
This was the only stop on the crawl that you received Jamaican currency back in change, however if you planned correctly you could simply give your change back for a tip. I enjoyed a couple of Gin and Tonics and Central Patti sipped on a Vodka Tonic.
Bourbon Beach was a great place and despite no Bourbon it was on the beach ;)

May 05, 2015
Recently MySideOfTheBar has been on the road to an undisclosed Caribbean location where we made an interesting observation. We stayed at a 5 Star all inclusive resort where there are no gratuities allowed under penalty of dismissal. The most noticeable and interesting thing was I have never seen a group of workers more happy, more polite or more helpful. No matter what their job from the grounds keepers, to house keeping to the wait staff to the bar tenders all were more that courteous  and always smiling.

We had a chef in the Japanese Steakhouse who was very entertaining with  his jokes and songs and general conversations. We had a bar waitress and a waitress in the Italian Restaurant that could not have been nicer and our wine glasses never were empty. The bartenders remembered what you drank and served you with a smile in very short order.

I guess what I am saying is I kind of felt bad for not being able to leave a tip. So if you are in the service industry in the U.S. keep this in…
Post a Comment
Read more
More posts